The Germans, after a week of relatively easy victories, approached a small Lithuanian village amidst the forest. Army Group North was among the first Germans to encounter heavier Russian tanks. These monsters dwarfed the German AFVs, and it was quickly discovered that they were not easily beaten with firepower. Turning to their tactical advantages of numbers, speed, and maneuverability, the German forces would often bypass these strong points and then reduce them at their leisure. That was not an option in this case. . . . .In a fairly large battle from the opening days of Operation Barbarossa in 1941, 10 Russian squads must defend a village from an attack by 12 German squads. The Germans are supported by six tanks of various types, while the Russians have an infantry gun and two tanks, one of which is a nearly invincible KV-2.

Yesterday, Neal Ulen and I finished our playing of S25 – Early Battles. Set North of Kaunas, Lithuania, 26 June 1941, it is an early Eastern Front, German vs. Russian conflict.

The Russians, me, are defending and have the majority of the two boards to setup on. The Germans, Neal, enter from the South edge, have to cross the width of board U and Control 4 buildings on board V to win, providing he has at least 2 mobile AFV’s still in the game. 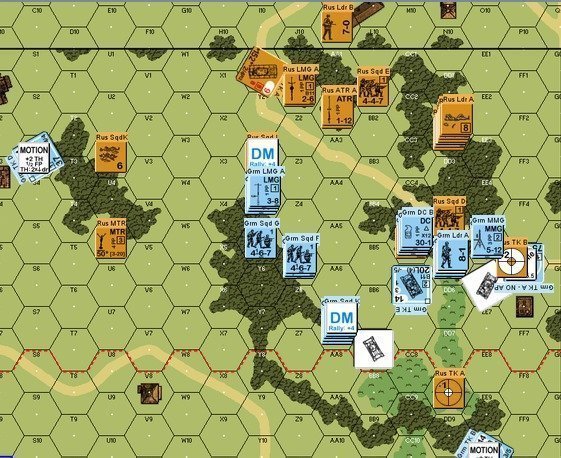 I set up my force fairly far forward, leaving good route paths and fallback positions. Neal came out quickly and aggressively with his tanks to soften up my defense, which worked fairly well, but also cost him two tanks to my ATR’s. One of his Pz IV’s got into a gun duel with my BT-7. They traded blows back and forth, both eventually becoming immobilized, before the BT-7 finally got the killing blow. 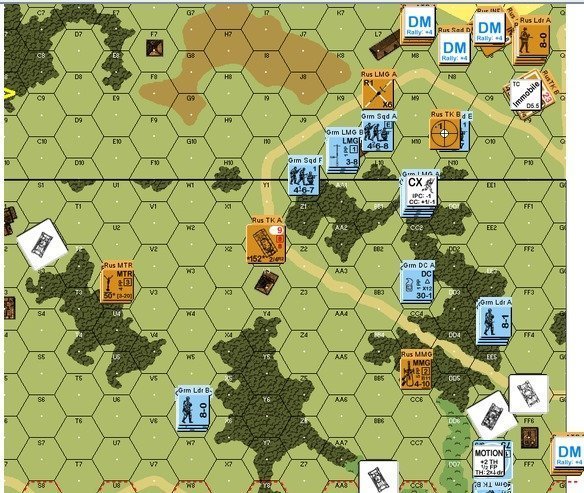 I was able to slow his infantry up at first, but it wasn’t long before I had no answer for the onslaught, and it soon became a route. About halfway through the game I was able to get another of Neal’s tanks with my beastly 152mm KV-2, with it’s thick armor, it was almost untouchable, but terribly slow and prone to breakdown. It was at this point, with only two tanks left and the victory in doubt, Neal ran his two remaining tanks to the bottom right corner of the map and parked them.

A turn or so later and I knew that there was no way I could stop Neal’s infantry from securing the victory locations. I could use my KV-2 to help my infantry try to hold onto at least one of the buildings, or my only hope really, go after his remaining tanks. My dilemma, the terrain being what it was and the speed of my tank compared to his, he would undoubtedly just run away from me. 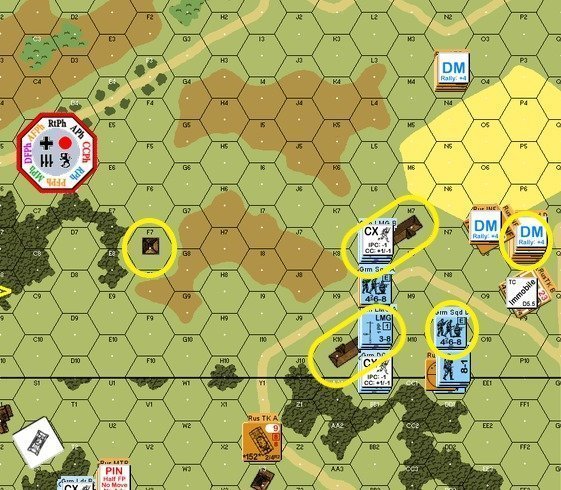 I devised a sinister plan, I was able to break away a Conscript Squad with an ATR and run him down the side of the board and put a pinch on his tanks. Neal had to choose between the ATR and the KV-2, he wisely chose the ATR. I did manage to get a hit with the ATR on one of his tanks, but only managed a “Shock” result. The game hung on the roll of a die, if the “Shock” result turned into an “Unconfirmed Kill” in the next Rally Phase, it would be the game, alas his roll allowed his tank to recover from the “Shock” status. The following turn he was able to take out the 4-2-6 with the ATR, and any kind of pursuit with the KV-2 would just turn into a game of “Ring around the Rosie”. 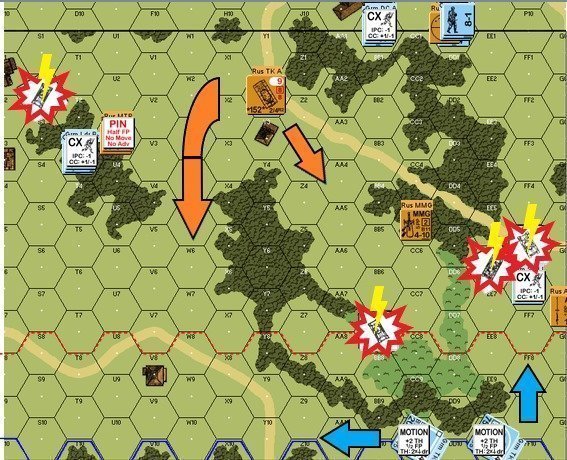 So at this point, with one turn in the game left, no hope of holding onto the village, and no hope of killing one more tank, I threw in the towel. It was a fun game, exciting at times and my thanks to Neal, but another close and disappointing loss.

But there’s always next time, right?