Multi-Man Publishing has announced that the reprint of Hollow Legions (the 3rd edition) is up for pre-order.

The last time the Italian module was in print was in 1990 … 31 years ago. This version adds many elements from West of Alamein as well as some other goodies. Read the official announcement below the break.

My recommendation is to always order ASL modules (if you can afford it) when they go up on pre-order, even if you never even get to crack the seal on it. I recommend this for two reasons. 1) You may never see it again for decades, and 2) even if you never use it you can easily sell it for at least what you paid for it.

This updated version of Hollow Legions includes the complete contents of the original (the entire Italian order of battle and Italian Chapter H—now updated, two desert boards, and eight scenarios), plus all the scenarios, boards, rules, and Desert parts from the now-superseded West of Alamein, plus Soldiers of the Negus, and 29 out-of-print scenarios.

Additionally, Hollow Legions now includes the rules and scenarios from Soldiers of the Negus, originally published by our friends at E.L.R. that expands the Italian theater to East Africa and the Second Italo-Ethiopian War of 1935-36. This was Mussolini’s war of aggression to conquer Ethiopia (Abyssinia) from Emperor Haile Selassie’s largely tribal armies and is widely seen as a precursor to WWII. A full complement of counters for both Ethiopian and Eritrean (allied with Italy) forces is included. 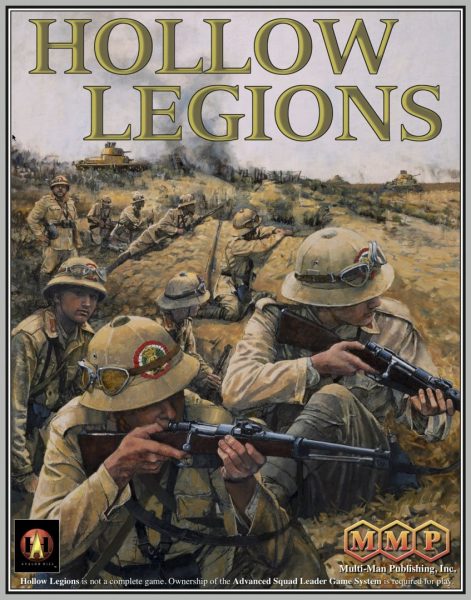