The release of this highly anticipated historical module is not expected until 2023. In a nutshell, its contents depict the first two days of fighting (June 6-7, 1944) in and around the Norman town of Sainte-Mère-Église during the allied landings on the beaches of Normandy. For the entire MMP release blurb, just scroll down below the box artwork. 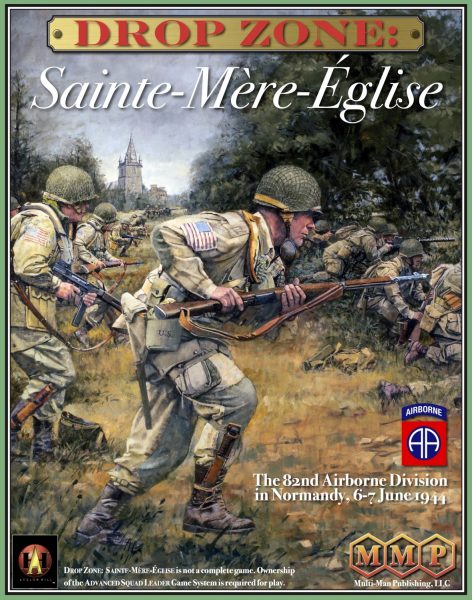 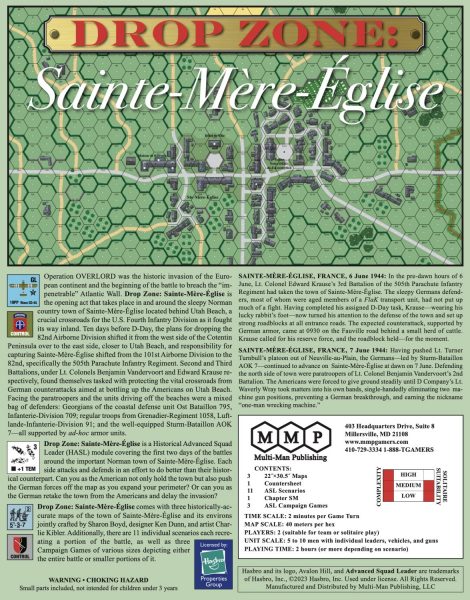 Operation OVERLORD was the historic invasion of the European continent and the beginning of the battle to breach the “impenetrable” Atlantic Wall. Drop Zone: Sainte-Mère-Église is the opening act that takes place in and around the sleepy Norman country town of Sainte-Mère-Église located behind Utah Beach, a crucial crossroads for the U.S. Fourth Infantry Division as it fought its way inland. Ten days before D-Day, the plans for dropping the 82nd Airborne Division shifted it from the west side of the Cotentin Peninsula over to the east side, closer to Utah Beach, and responsibility for capturing Sainte-Mère-Église shifted from the 101st Airborne Division to the 82nd, specifically the 505th Parachute Infantry Regiment. Second and Third Battalions, under Lt. Colonels Benjamin Vandervoort and Edward Krause respectively, found themselves tasked with protecting the vital crossroads from German counterattacks aimed at bottling up the Americans on Utah Beach. Facing the paratroopers and the units driving off the beaches were a mixed bag of defenders: Georgians of the coastal defense unit Ost Bataillon 795, Infanterie-Division 709; regular troops from Grenadier-Regiment 1058, Luftlande-Infanterie-Division 91; and the well-equipped Sturm-Bataillon AOK 7—all supported by ad-hoc armor units.

Drop Zone: Sainte-Mère-Église is a Historical Advanced Squad Leader (HASL) module covering the first two days of the battles around the important Norman town of Sainte-Mère-Église. Each side attacks and defends in an effort to do better than their historical counterpart. Can you as the American not only hold the town but also push the German forces off the map as you expand your perimeter? Or can you as the German retake the town from the Americans and delay the invasion?

Drop Zone: Sainte-Mère-Église comes with three historically-accurate maps of the town of Sainte-Mère-Église and its environs jointly crafted by Sharon Boyd, designer Ken Dunn, and artist Charlie Kibler. Additionally, there are 11 individual scenarios each recreating a portion of the battle, as well as three Campaign Games of various sizes depicting either the entire battle or smaller portions of it.

Drop Zone: Sainte-Mère-Église is not a complete game. Ownership of the Advanced Squad Leader Game System is required for play.