Decision at Elst campaign game day 1 (afternoon) done against Scott Rowland. This was our first experience with a CG and we are still getting back into ASL, so the going was a bit slow. 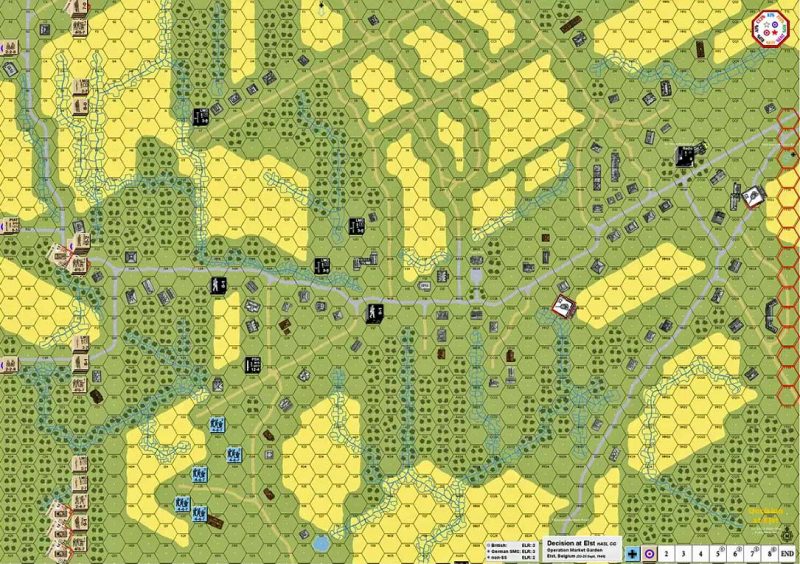 I took the Brits with their generous supply of tea & biscuits, which left Scott with the German SS and their generous supply of morale. I started out making good progress, taking on a three pronged assault…top, middle through the buildings, and bottom. But once I broke out of the orchards and grain it was tough going. In fact, I severely underestimated the challenges of the terrain on this board. Don’t make the same mistake as me. It’s very slow going, and the hindrances are both a blessing and a curse. Polders are a massive pain in the butt with regards to approach, especially with armor. 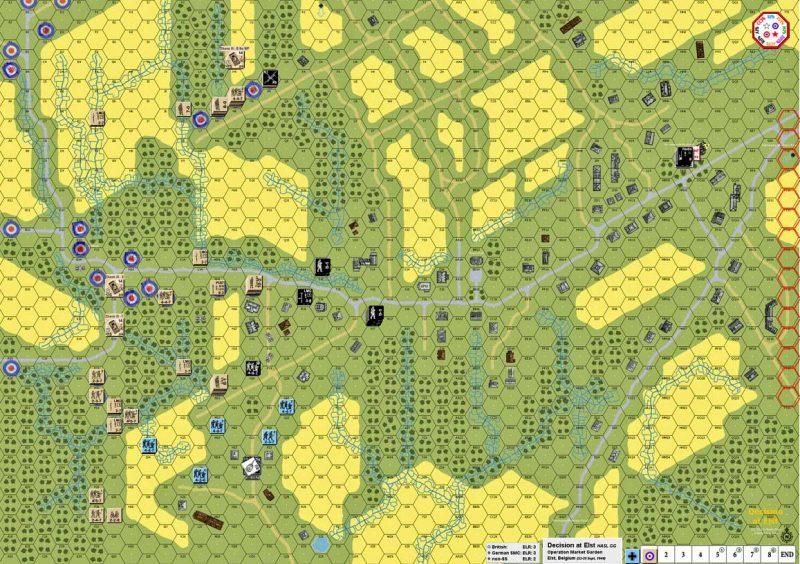 Scott’s OBA harrassed me the whole time. I lost a Firefly and Sherman early to one of his Panthers that possessed a seemingly godly crew and just couldn’t miss. I would get payback later! I eventually swarmed it and took it out with a rear shot, then lost another Sherman to immobilization due to OBA. I pulled my other Shermans back as we were nearing the end of the afternoon session. His other Panther was on the prowl for Sherman blood and I was surrounded by Panzerfausts which is instant death for an AFV. As I pulled my Sherms back Scott got off one PF shot and hit one. My only hope was that he’d roll a 12 for the TK (slim hope). He rolled a 12 (clang! dud) and that Sherman was able to slip through the gauntlet and retreat to the rear lines in hopes of getting refit for the morning push.

Meanwhile trying to flush his Germans out of stone buildings in the center was like trying to get rid of well dug in ticks on a bird dog. I didn’t take a lot of casualties but I had two sessions of cursed VASL rolls. Attrition from broken units started to mount. Being spread out with limited leaders to cover (and one dead 9-1) my Brits started crumbling like a biscuit before being dipped in tea. At one point I counted something like 15 broken squads/half-squads/crew around the board. I couldn’t self rally any to save my life (and SSR gives us 2 self-rally attempts!) I finally secured the buildings at the top by taking out his straggling SS squad in CC. I think I broke 5 MGs along the way too, with 2 being outright eliminated. It was brutal afternoon for British luck. 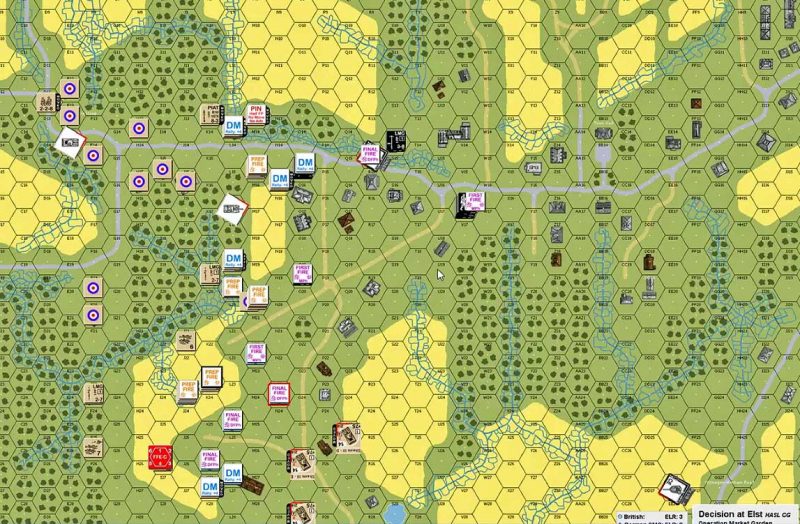 My spearhead up the road through the village stalled. I had not made as much progress as I’d hoped…but progress none the less. With few actual casualties (1.5 squads out of 21 total). Thankfully the day ended on turn 6 (random scenario length) so I can regroup and refit.

Scott lost some squads (3 of his 13, nearly 25% of his starting force) and 1 Panther, but managed to hold the bottom of the board and force me to abandon that push completely.