It’s time to break out those credit cards … and roll low!

The “ASL Trio” can be ordered as a combined set: 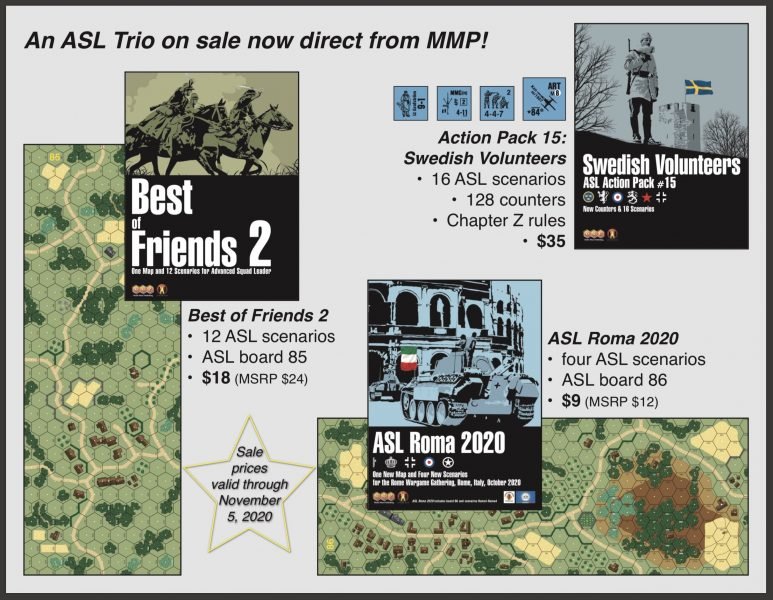 Combines the three scenario packs into one easy to order bundle.

Or you can order them as individual packs:

Best of Friends 2 follows 2013’s Best of Friends with 12 more scenarios from the Swedish Friendly Fire ASL Tournament and also includes an 8˝ × 22˝ geomorphic mapboard that originally appeared in Friendly Fire Pack 6 and has been repainted here by Charlie Kibler as board 85.

As with Best of Friends, the 12 scenarios in Best of Friends 2 have been updated using official layout and terminology, and in some cases updated for balance. This collection presents a selection of scenarios designed by Mattias Rönnblom, Martin Svärd, Chris Mazzei & Peter Struijf, and Pete Shelling and cover a variety of actions from 1939 to 1945 that feature German, Japanese, New Zealand, Polish, and Russian forces in some of the best tournament-sized offerings available in ASL. We’d like to thank the Friendly Fire team for the scenarios in this pack!

Action Pack #15: Swedish Volunteers is MMP’s production of the original Swedish Volunteers scenario pack by Martin Svärd and Erik Leander. Technically neutral during WWII, Sweden still offered her assistance in the wider defense of her Nordic neighbors through the formation of Frivilligkåren (the Volunteer Corps). Though this corps was demobilized in 1940, Swedish volunteers continued to see action during the German invasion of Norway and later during the Continuation War allied with Finland and Germany against the Soviet Union.

The 16 scenarios in Action Pack #15: Swedish Volunteers include all 14 from the original release, which have been updated using official layout and terminology, and in some cases updated for balance, as well as two additional scenarios, one previously published by Friendly Fire and one brand-new scenario. These cover a variety of actions from the Swedish defense of Märkäjärvi, Finland in 1940 during The Winter War to Swedes united with Norwegian and British forces in Norway during Operation WESERÜBUNG to battles against Soviet forces during the Continuation War of 1941-44.