Stoumont is a Belgian village just miles away from the German border to the east. It lies west of the village of Malmedy where the infamous massacre of 84 American prisoners of war was carried about by soldiers of Kampfgruppe Peiper, under the command of Joachim Peiper . . . who was a fanatical member of the Waffen-SS.

The action depicted in this historical ASL module takes place mere days after the discovery of the massacre and covers the desperate fighting by American defenders trying to stop the advance of well-equipped and experienced German soldiers as they attempt to push the allies away from the German border during the early days of the Battle of the Bulge.

This was Avalon Hill’s second historical ASL module after Red Barricades. It features a large, historically accurate map depicting the village of Stoumont and the surrounding roads, buildings, fields, forests, and streams. There are thirteen levels of elevation detailing the hills and valley surrounding the village, creating unique line-of-sight challenges for all players.

This map can be found in Avalon Hill’s ASL historical module Kampfgruppe Peiper I (1993). There’s no need to download this map separately, it should download automatically with your VASL installation.

By the evening the German spearhead had pushed north to engage the U.S. 99th Infantry Division and Kampfgruppe Peiper arrived in front of Stavelot. Peiper’s forces were already behind his timetable because of the stiff American resistance and because when the Americans fell back, their engineers blew up bridges and emptied fuel dumps. Peiper’s unit was delayed and his vehicles denied critically needed fuel. They took 36 hours to advance from the Eifel region to Stavelot, while the same advance required nine hours in 1940.

Kampfgruppe Peiper attacked Stavelot on 18 December but was unable to capture the town before the Americans evacuated a large fuel depot. Three tanks attempted to take the bridge, but the lead vehicle was disabled by a mine. Following this, 60 grenadiers advanced forward but were stopped by concentrated American defensive fire. After a fierce tank battle the next day, the Germans finally entered the town when U.S. engineers failed to blow the bridge.

Capitalizing on his success and not wanting to lose more time, Peiper rushed an advance group toward the vital bridge at Trois-Ponts, leaving the bulk of his strength in Stavelot. When they reached it at 11:30 on 18 December, retreating U.S. engineers blew it up. Peiper detoured north towards the villages of La Gleize and Cheneux. At Cheneux, the advance guard was attacked by American fighter-bombers, destroying two tanks and five halftracks, blocking the narrow road. The group began moving again at dusk at 16:00 and was able to return to its original route at around 18:00. Of the two bridges remaining between Kampfgruppe Peiper and the Meuse, the bridge over the Lienne was blown by the Americans as the Germans approached. Peiper turned north and halted his forces in the woods between La Gleize and Stoumont. He learned that Stoumont was strongly held and that the Americans were bringing up strong reinforcements from Spa.

To Peiper’s south, the advance of Kampfgruppe Hansen had stalled. SS-Oberführer Mohnke ordered Schnellgruppe Knittel, which had been designated to follow Hansen, to instead move forward to support Peiper. SS-Sturmbannführer Knittel crossed the bridge at Stavelot around 19:00 against American forces trying to retake the town. Knittel pressed forward towards La Gleize, and shortly afterward the Americans recaptured Stavelot. Peiper and Knittel both faced the prospect of being cut off.

At dawn on 19 December, Peiper surprised the American defenders of Stoumont by sending infantry from the 2nd SS Panzergrenadier Regiment in an attack and a company of Fallschirmjäger to infiltrate their lines. He followed this with a Panzer attack, gaining the eastern edge of the town. An American tank battalion arrived but, after a two-hour tank battle, Peiper finally captured Stoumont at 10:30. Knittel joined up with Peiper and reported the Americans had recaptured Stavelot to their east. Peiper ordered Knittel to retake Stavelot. Assessing his own situation, he determined that his Kampfgruppe did not have sufficient fuel to cross the bridge west of Stoumont and continue his advance. He maintained his lines west of Stoumont for a while, until the evening of 19 December when he withdrew them to the village edge. On the same evening the U.S. 82nd Airborne Division under Maj. Gen. James Gavin arrived and deployed at La Gleize and along Peiper’s planned route of advance.

German efforts to reinforce Peiper were unsuccessful. Kampfgruppe Hansen was still struggling against bad road conditions and stiff American resistance on the southern route. Schnellgruppe Knittel was forced to disengage from the heights around Stavelot. Kampfgruppe Sandig, which had been ordered to take Stavelot, launched another attack without success. Sixth Panzer Army commander Sepp Dietrich ordered Hermann Priess, commanding officer of the I SS Panzer Corps, to increase its efforts to back Peiper’s battle group, but Prieß was unable to break through. 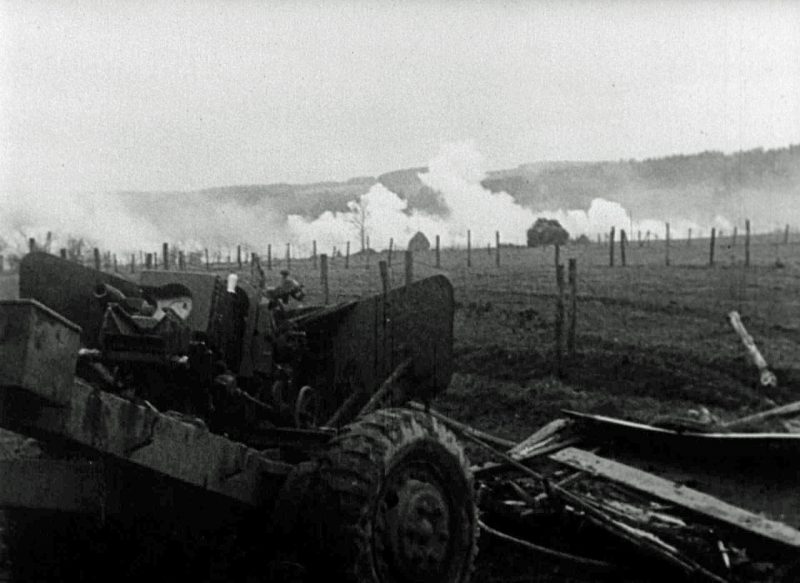 Small units of the U.S. 2nd Battalion, 119th Infantry Regiment, 30th Infantry Division, attacked the dispersed units of Kampfgruppe Peiper on the morning of 21 December. They failed and were forced to withdraw, and a number were captured, including battalion commander Maj. Hal D. McCown. Peiper learned that his reinforcements had been directed to gather in La Gleize to his east, and he withdrew, leaving wounded Americans and Germans in the Froidcourt Castle. As he withdrew from Cheneux, American paratroopers from the 82nd Airborne Division engaged the Germans in fierce house-to-house fighting. The Americans shelled Kampfgruppe Peiper on 22 December, and although the Germans had run out of food and had virtually no fuel, they continued to fight. A Luftwaffe resupply mission went badly when SS-Brigadeführer Wilhelm Mohnke insisted the grid coordinates supplied by Peiper were wrong, parachuting supplies into American hands in Stoumont.

In La Gleize, Peiper set up defenses waiting for German relief. When the relief force was unable to penetrate the Allied lines, he decided to break through the Allied lines and return to the German lines on 23 December. The men of the Kampfgruppe were forced to abandon their vehicles and heavy equipment, although most of the 800 remaining troops were able to escape.

ASL maps can be considered to be a form of artistic expression, and the Map Spotlights are meant as quick history lessons on available historical Advanced Squad Leader actions. These articles are meant to highlight both a short history of the battle portrayed for players unfamiliar with the setting, as well as show the ASL map on which it plays out.Citation: —. “Battle of the Bulge.” Wikipedia, 18 June 2002, en.wikipedia.org/wiki/Battle_of_the_Bulge.