German paratroops and grenadiers had held St. Come-du-Mont against constant pressure from American paratroops for two days but the Americans were already getting relief from the beaches. And then the Americans cut the road to Carentan from the south leaving them surrounded on three sides with only the flooded lowlands open to the west. The time had come to break out to the south and reform in Carentan … if they could …

Robin and I are currently playing Trapped! (15), with him as Americans (plus balance) and myself as the Germans. It’s been a topsy-turvy kind of Part 1, and I got to German turn 7 DFPh still with a chance to exit 10 squads, but in final fire, I failed too many PTCs and only 8.5 were in position to exit the map for a possible win. With American balance in effect, my lost squads (8 in total) get replaced with 436 squads (and a lost 7-0 get replaced by a 6+1). The Americans losses in Part 1 were 4.5 squads and a 7-0 leader. One American hero has also been generated (and survived) to participate in Part 2. The really noticeable feature is the big blaze in the middle of the map; there’s every chance that  it will at some point completely cut the board in half.

(picture shows the end of part 1) 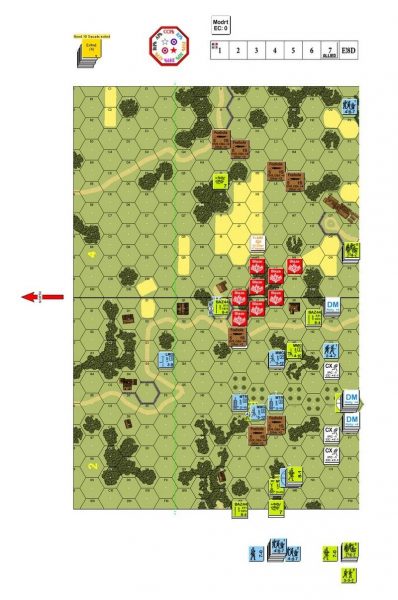 Part 2 was challenging with the American balance in effect (losses replaced by 436s instead of 447s). On a 1MC, conscript units will disrupt on a DR8+ !!! So I deployed the 436s heavily, and did my best to attrit the Americans down as much as possible so as to make the last turn exit as simple as can be.

There was plenty of good and bad luck for both sides, the map was eventually cut in half by the spreading blazes, and in the last DFPh, Robin’s last MMG shot needed to pin 2 squad equivalents, but only managed 1, and my Germans just managed to exit 10.5 squads in total for a victory.

Condolences to Robin; it did look like this game would be won by him, but I got just enough fortune to go my way. The scenario plays a bit like a Campaign Game in that survival (in Part 1 at least) is quite critical, and will add a new flavor to Robin’s ASL experience. 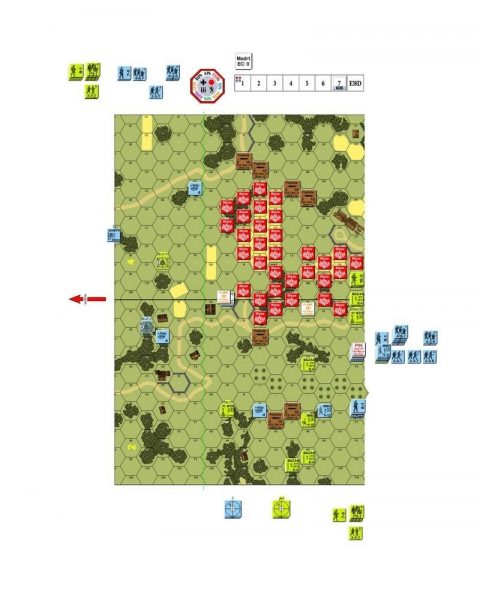