On the night of 17th of April, elements of a recon troop of the American 26th Infantry Division occupied a tiny village on the outskirts of Aschaffenburg without opposition. Based on civilian reports of the presence by the enemy, the staff of the 471st Replacement Division, the only German military unit in the vicinity, launched a hasty counterattack …

Robin came over to my home this morning for another ASL FtF playing. Robin is keen to obtain more experience in armored warfare, ASL style. Lately I’ve taken a new approach to teaching AFVs. Basically, I’ve categorized AFV scenarios into 4 categories, in order of complexity:

Infantry support is the most simple to grasp, so we’ll spend a few scenarios doing those before moving on to Infiltration, then Armored Duels, before finally arriving at Combined Arms.

Today’s choice of scenario was ASL S “The Whirlwind”, with Robin as the German attacker, and myself as the (entirely HIP) American defender. The first picture shows my American setup. I wasn’t sure if a Baz’45 in P3 was the best idea, but the ability to advance (concealed) to Q3 or Q4 meant that I could cover a lot of ground. The Baz ’45 is quite accurate, and must be respected even at range 5 (especially considering that the FkPzIV is a large (-1 TH) target). I put the other Baz’45 in reserve, and put squads in Y2 and AA6 to dig foxholes so as to make defending the rowhouse blocks of board 10 a little less of a rout deathtrap (1st photo). 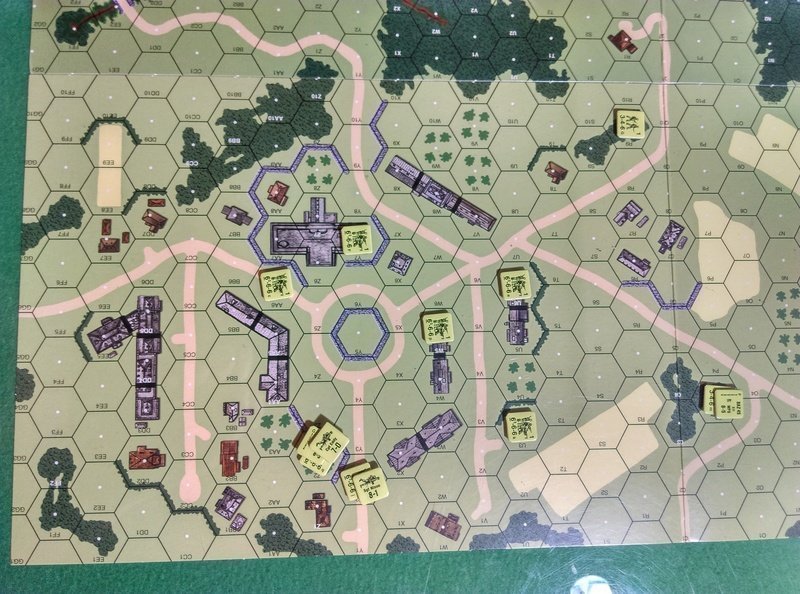 Robin deployed heavily and set about finding the Americans. Civilian Interrogation was in play, but Robin and I got no information from the civilians at all. The FkPzIV enjoyed some good early shots, KIAing a HS and breaking a couple of other squads, too. But when it stopped in U7, I advanced the P3 Baz team to Q4, and roasted the FkPzIV with a Critical Hit (C3.7). By the end of turn 5, the intensity of the (now infantry only) battle had drawn out the last of the HIP American units, and it was a race against the clock for the Germans to grab the final buildings. But this became a likely reality, as my fire more often than not pinned German units, which was fine in the short term, but left me trapped in my following turn , forcing me to have to try and shoot my way out.

Robin had by far the better of the firefight (his  9-2 and LMGs giving him a good advantage), I managed to escape a few times, but fate eventually caught up with me, especially in my last turn when an encircled squad escaped its encirclement (A7.7), but took a HOB (A15), went Berserk (A15.4), and then charged the wrong halfsquad !! After this, the Germans only needed to overwhelm a lone 7-0 in their final turn to claim the last building, BB3 (2nd photo). 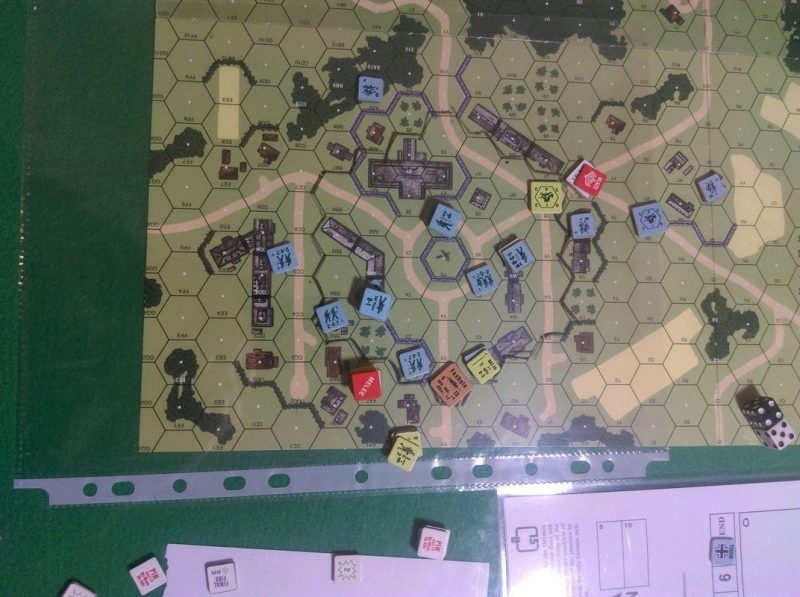 So congrats to Robin, he gets his first ASL win vs me. I think he enjoyed this scenario (what’s not to like about getting a FkPzIV in an infantry support mission ?), too.