Day after day in mid-January, the Soviets launched repeated attacks against the Italians of the Cuneense, Julia, and Tridentina divisions. Often the attacks never even made it across the frozen Don River to the fortified positions. On January 16th, they tried again, striking the Tridentina Division …

For a bit more OBA practice, Robin and I played Red Don (AP21), which we finished last Monday. I played the defending Italians, whilst Robin played the attacking Russians. To win, the Russians need 10+ CVPs of MMCs on level 1 hill hexes west of the river. The Italians defend with 11 447 squads, trench and wire fortifications, and 80mm OBA. The Russians attack with 20 squads lead by a 9-2 leader. There is Falling Snow (E3.71) and the Russian units have Winter Camouflage (E3.712), which allows squads to retain concealment when using AM in OG.

I heavily fortified the northern river bank with wire and mines, and had a trench line running along the southern hills. My infantry were set up in reverse slope defense, as I didn’t much relish being blasted off the map by a 9-2 MG nest. So I happily gave a little ground to begin with, confident that a concentrated defense in the south could stop the Russians cold. As it turned out, I had the odd good shot, but a lot of “NE” in between, and as a consequence, too many Russians got too close. I didn’t get any help from the OBA until Russian turn 5, but by then it was too late. I got stuck in a mediocre DR funk, rarely rolling below a 9 on IFT attacks, and eventually the return fire broke the back of my Italians. By the end of the Russian turn 6 MPh, Robin already had the 10 CVPs he need on the hill, and it was clear that number was only going to increase, so I had to wave the white flag and concede defeat.

The OBA did have some modest success with its (eventual) FFEs, but my indifferent IFT shooting doomed the Italians. It was good to see Robin using his Winter Camouflage to good effect, AMing concealed across the Don River. 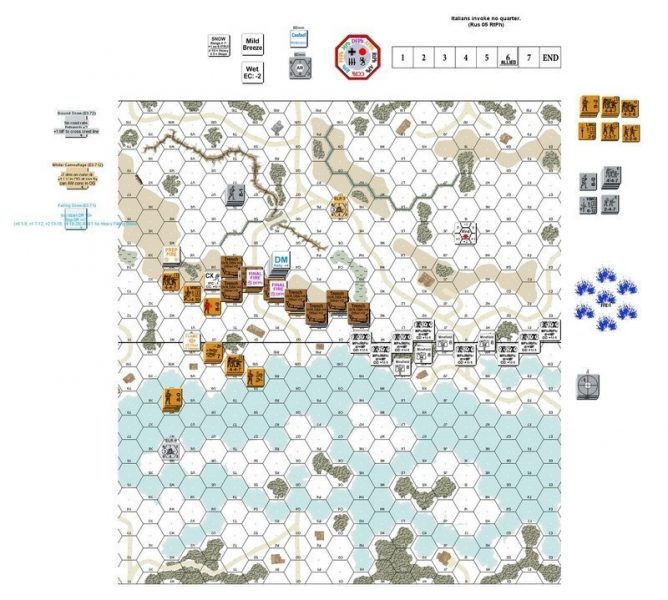