On January 3rd, 1945, VII Corps launched its offensive to reduce the Bulge salient. The drive, with the 2nd Armored Division as a key element, headed towards Houffalize. Over a foot of snow covered the ground and the armored columns were forced to follow passable roads. Two houses were observed to their front when suddenly a panzerfaust struck the lead tank … 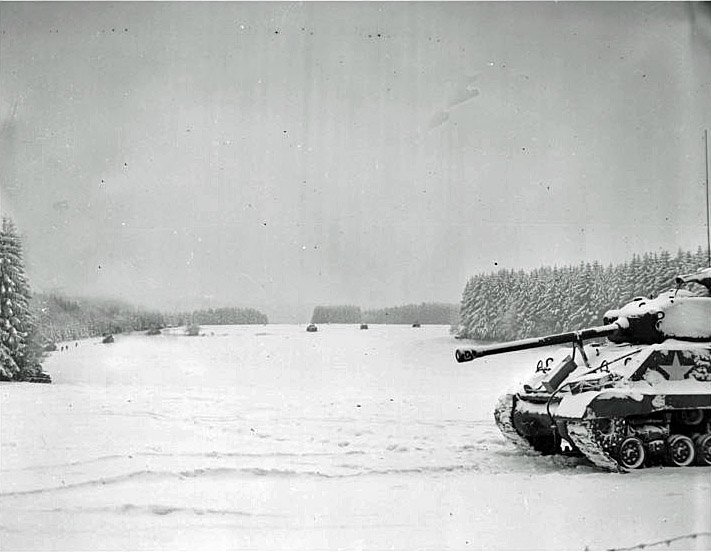 Belgium … January 1945 … The Battle of the Bulge. Deep snow (E3.73) covers the fields and woods surrounding Coroie, Belgium, and Cpt. Robert E. Lee, D Company’s commanding officer, moved across the fields flanked by two platoons of infantry in the woods to his right. German machine gun fire soon ripped across the open ground into the infantry who took cover in the trees. As Lee moved his M4 Shermans up the plowed road, a Panzerfaust erupted from one of the nearby houses and slammed into the side of one of the tanks, absorbed by the hastily secured sandbags that hung from its side.

Lee had found the dug in Germans, it was time to start reducing his small corner of the salient. On to the action …

Scott had choices of sides this time and picked the Americans. Their force consisted of:

This left me the defending Germans units comprised of:

The American dilemma is where to bring on its armor … spread them out across the open fields and risk getting bogged, mired, and possibly immobilized in the deep snow and soft ground … or move the column up the plowed road and risk getting bunched up, hit by German OBA. Both present their own risks.

Next he moved his remaining infantry on top side of the right edge, using the woods as cover. The deep snow makes moving infantry a bit of a burden. I couldn’t really bring any FP on to these moving infantry due to LOS.

During my DFPh I established radio contact and pulled a black battery access. I place the AR smack dab in the center of all of his units, risking the SR going off board so I could have it go off in my PFPh instead of trying to lead his units and having it go off a bit deeper onto the board during my next DFPh. As you’ll see later it mostly worked out.

Scott didn’t bother with advancing fire with his Shermans. After moving, my units being conceals and in foxholes/fortified buildings there was more of a chance of him setting off my sniper than getting a hit/result. After advancing his infantry that was effectively the end of the American turn 1.

During the German PFPh I lost battery contact, but my SR stayed in place where it was, meaning I would have to adjust it during my DFPh anyway … something I wanted to avoid.

I made the dumb mistake to try and move a squad (with a PSK) out of the foxhole in U3 a bit closer to the road as Scott was choosing to run the road gauntlet instead of running through the deep snow. He lit up the squad with some good rolls from his leading Sherman. It ELR’d then he got a subsequent casualty reduction on it, then I failed another MC … thus eliminating the entire squad. Ouch. So much for moving closer. Dumb move on my part. I should have been more patient.

All in all this was a dud of a turn for me that accomplished next to nothing.

Here’s the situation at the end of Turn 1 …

Scott’s M4s cautiously move up the paved road, continuing to use armored assault movement with a couple squads. But he gets bold and decides to test my concealed defenses with his leading Shermans. It rolls by the fortified building in X6 that holds a concealed German HS. The HS checks for an opportunity to fire a PF, is successful, and manages to get a hit just as drives past. A hit with a PF is a guaranteed kill on almost any AFV in ASL, and turns the Sherman into a burning wreck (W6). The rest of Scott’s Shermans pull up short, probably to re-assess the situation on how to get through the Germans fortified in buildings and dug into foxholes. The Shermans take some shots in the AFPh, the leading one malfunctioning it’s MA in the process.

Meanwhile he moves the rest of his infantry into the woods to the right of the main plowed roll, presumably to make a push through the woods at the top to avoid all the open ground. I have little defensive fire that I can bring to bear without breaking concealment … I choose to sit on most of my concealment for now.

My Germans finally get their OBA in order. I have retain battery contact so I’m able to correct my 70mm and drop it on the cluster of Shermans with squads stacked beneath them during my DFPh. My stellar dice rolling skill only manages to break one of the squads … but my OBA is now set up well for the FFE2 that will resolve in the PFPh of my turn. Scott has a stack of units in CC3 sitting the woods that looks to be a juicy target.

Scott tries to repair the MA of the Sherman in Z5 but only manages to break it permanently, reducing it’s EVP value slightly.

It’s the German Turn 2 and I start off by correcting my FFE2 OBA to hex CC3. It isn’t accurate but errs only one hex to BB2. I end up getting a KIA on the squad squatting in the open ground snow (BB3), and manage to break all his units in CC3.

The American’s defensive fire most of their armor and breaks my 8-1 leader, HS, and MMG in the T7 foxhole that was covering the open ground. My concealed 9-1 and squad decided to try and take out the broken squads in CC3 by dropping their MMG and double timing around the perimeter of where the OBA went off, ending up in DD3, thus putting Scott’s broken 8-1 and two squads in quite the predicament.

Scott fires his armor, but with little affect his time. He’s still not used his 100mm OBA using the OP radio in one of his M4s.

During the RtPh I make the decision to not reveal any of my concealed units to eliminate his units in CC3 for failure to rout, this forces them to rout through two hexes of OBA to try and reach AA2. The interesting thing about routing through OBA is that FFNAM/FFMO does not apply … perhaps I should have NQ those units. Regardless, the effect was almost the same. After being force to rout through the OBA only a broken HS remains.

At this point the two American infantry platoons that started the scenario are significantly disrupted, with only two good order squads on the board, the rest have been eliminated or are broken.

Scott’s leading Sherman is now under recall due to it’s permanently disabled MA and must bug out to the north side of the board using motion movement.

He finally decides to fire up his OP OBA but fails his contact check, and only makes one Prep Fire shot from his Sherman in BB5. During his movement phase he begins moving the rest of his Sherman into the teeth of my defenses. I have ample opportunities to return fire with my LATWs. I believe I made 5 PF checks. Between failing the checks and/or failing to hit … I came up with a giant goose egg with my LATWs. I also took one shot with the PsK in the T7 foxhole only to miss.

Scott had to be liking those results.

My only saving grace was most of those Shermans would be Stopped and in close range for my next PFPh if I could manage to hold on during his AFPh. If my luck turned it could very well be the end of the game because most of his EVPs were now tied up in his AFVs. He had to get all of the off the board to have a chance to win since I’d already nuked one and another was recalled.

Scott’s AFPh only resulted in a pin on one of my HS, so I came through unscathed and was set up looking really good for my next tern (German Turn 3).

The American infantry assault was all but dead, all that remained was a long squad using armored assault in V5, so I was going to spend all my effort eliminating Shermans. Taking out two should do it, and there was ample opportunity to do so.

This is the second scenario where I’ve had pretty good results with OBA, rules that we are just not getting re-acclimated to. In my previous DFPh I’d continued on with FFE:C and placed a new AR in V6 (and also pulled black), right in the heart of his Shermans … but also smack dab in the center of my units. But I went for it. Miraculously during this PFPh I maintained contact and the OBA landed accurately.

It’s a long shot to get any result against an AFV, especially with 70mm OBA, but I managed to a 3 for the Sherman in V6, shocking it. I then managed to blaze the Sherman in V5 with a one hex PF shot. Then go a critical hit with the PsK in T7 on the V7 Sherman, melting it to the ground.

It was over at that point, Scott threw in the towel … he didn’t have enough VP left on the board to meet the VCs, assuming he could rally everything and make the run through the gauntlet.

Based on ASL ROAR data this is a balanced scenario, with 27 recorded wins for either side. But our playing felt very one sided. The American’s could never get any traction getting across the board and couldn’t soften up any of my defenses to make a run for it.

Post game discussion brought up some interesting ideas like running all the infantry through the top woods forcing the Germans to react with some units and open up the road gauntlet a bit. As you can see from the hidden red Acquisition counters in the upper right (to denote MMG and HMG bore sighted hexes) that I had anticipated Scott to do this.

Also, bringing the OP Sherman on board around FF9 and just parking it there an attempting to drop 100mm OBA the entire game (or at least early game) to soften up the Germans.

Risking moving the Shermans off the road is a crap shoot. Scott did it a few times towards the end and didn’t bog, but he could just as easily done it early in the game and found them in a bog nightmare. So who knows which strategy is more sound: run up the plowed road or drive into deep snow.

This is a game we’d like to play again just to see how things would work out differently, but as most ASLers know … there are SO many scenarios to play the re-playing scenarios often gets put on the backburner.