The bridge at La Fiere carried the road from Ste. Mere-Eglise across the Merderet River and was the main objective of the 101st Airborne’s 1st Battalion, 505th Regiment. After a successful drop, they set off for their objective a mere 1,000 yards away – only to be met with machine gun fire from a farm on the outskirts of town. The farmhouse would have to be taken before they could move against the bridge …

Robin and I finished our game of ASL-013 “Le Manoir” last Friday evening. It looks like we’re going to play our way through all of the original ASL Module “Paratrooper” scenarios in their MMP “Yanks II” updated form, which will be both ideal for Robin, as well as nostalgic yet refreshing for me. In our first completed game, Robin played the attacking Americans, whilst I had the defending Germans. We will probably stick to these sides throughout the “Paratrooper” scenarios, too – and this will better allow me to showcase AFV (and in particular combined arms – infantry and AFV co-ordination) tactics when we get to those scenarios.

In this scenario, The Americans have to capture 2 stone buildings, T3 and S2. The Americans greatly outnumber the Germans (11 to 2.5 !!!), but the Germans do get a few MGs, they also get to set up HIP, and there is quite a bit of open ground to cross. The Germans can also win an instant victory by reducing the American OoB to 4 or less GO Squad-Equivalents, so the American cannot be too reckless.

Robin did a good job of splitting his forces and used the cover of the Bocage hedges to attack down the 2 sides of the map, which enabled him to attack from both directions. I was hoping to be able to attrition the Americans down with my high ROF HMGs and MMGs, but the good fire phases were few and far between for me, and it took all my effort just to survive. I did get some notable help from sniper attacks (SAN 5), and for the most part, my MCs were decent, and at one point I had the Americans reduced to 5.5 GO squads.

By the last turn of the game, I had only 2 HS left (as well as a 9-1 leader and 2 149 heroes) and used 1 HS and a hero to block the right side, whilst hoping to halt the left side with all the FP I could muster. It was pretty tight, but in the end, I was barely able to prevent the Americans from reaching the S2 building in the final turn, thereby guaranteeing a German victory. A tight, tense, last turn game!! 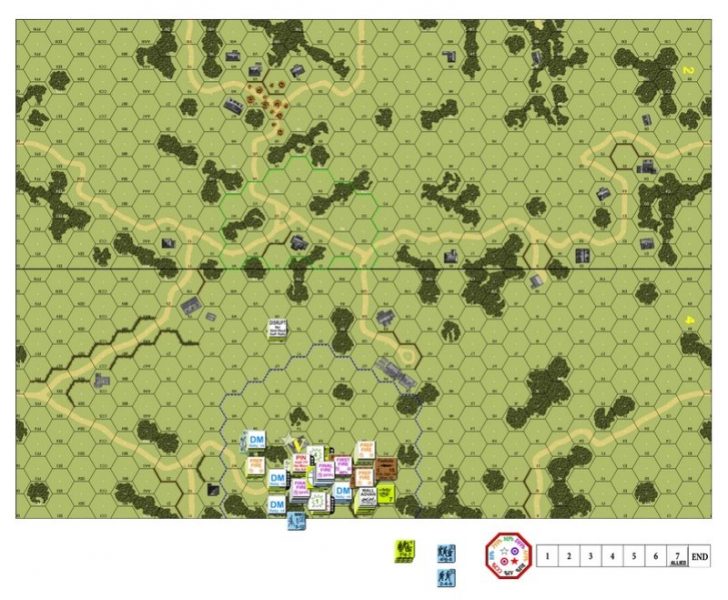 Robin may have come up a bit short, but I can see that he is progressing well in his attacking tactics; in particular his use of infantry smoke. There will be opportunities later for Robin to try with White Phosphorus (WP, A24.3)……and I think he will enjoy that !!!