By dusk on the 14th, the Germans had established three bridgeheads across the Meuse River. The 15th brought the next stage: the breaking of the last major elements which stood between them and the great plains of France. One point of the last line of defense was the village of Bouvellemont. Here, one regiment of the 15th Division proved too much for the German 1st Infantry Regiment and the attack soon bogged down. With more than half of their officers killed and many of the companies at half strength from fatigue as well as losses, the regimental commander, Colonel Balck, realized that for the attack to continue, he would have to lead the final assault himself.

Continuing with our OBA training, Robin and I played Last Defense Line (A94/235) (which was originally an old 200 series COD scenario, updated to ASL in the ’96 ASL Annual). I played the defending French, whilst Robin played the attacking Germans. German balance (which upgrades the German 10-2 to a 10-3) was in effect. The Victory Conditions are drawn randomly at the scenario start, and known secretly by the Germans until time runs out, so the French need to hold their line, and (in case of Chit #1) keep their casualties to a minimum.

The Germans have a lot of time in this scenario, but the inability to Double Time (A4.5) somewhat mitigates that. To further slow down the Germans, I set up the MMGs (in foxholes) in 4P3 (bore sight 4I7) and 4K3 (bore sight 4P10), so as to lay down intimidating Fire Lanes (A9.22). The key with fire lanes is that smoke, grain, and brush hindrances are NA (although they do cancel FFMO), meaning that units who cross them will be subject to residual, most often @-1 for FFNAM. I put the 60mm mortar in 3DD2 (bore sight 4O5) with 2 half-squads, one to fire the mortar, and another to hopefully Entrench (B27.11). The 65mm Infantry Guns went in 3Y6 (bore sight 4I5) and 3X3 (bore sight 3Z1).

I think having a 10-3 leader might have made Robin a little over confident, and early on he tried to force his way through my fire lanes. I enjoyed some crisp shooting, and the Germans quickly lost 2.5 squads early on. His squads continued to break regularly, and he rolled a few 12 MC and rally DRs, which further piled up the German casualties. It seemed that nearly every one of my bore-sightings accounted for someone, but with my 9-1 going Berserk, and both of my IGs malfunctioning out, I was left with just a few squads and one leader to defend with. As much as I could, I avoided the 10-3 and his MG ‘deathstar’, but as time started to run low, I was content to put 1 unit in his path to force it to Prep Fire instead of moving. 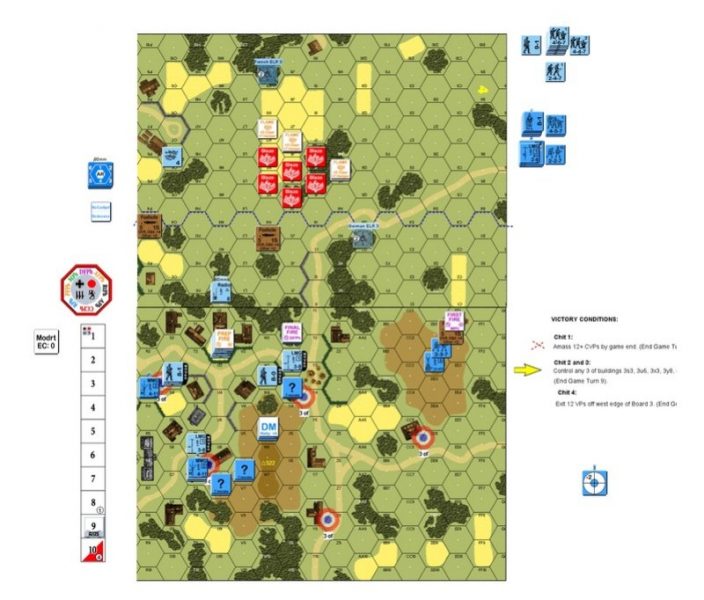 Robin reached the 12 CVP target of Chit #1 by about turn 7, so it was lucky for me that those weren’t the VCs. With his high casualties, exiting 12 VPs (Chit #4) looked to be very hard, so my focus was on holding the VC buildings. But during turn 9, I was able to KIA the only squad capable of taking building U6, which ended the scenario as a contest.

A good fun scenario, and this time Robin was able to land a smoke FFE, so the OBA at least played a part in this scenario.