By noon the first day, the German 20th Motorized Infantry Division was surging across the so-called “Polish Corridor” from the west towards the vital crossroads at Chojnice. Along the Chojnice-Naklo rail line, the German vanguard had been fought to a standstill by recently mobilized Polish reservists. But Polish casualties were mounting and ammunition was low. The Germans were so close that attempts to break off the action and withdraw failed. The Polish Uhlan Regiments, perhaps the finest cavalry in the world, was ordered to extricate their comrades …

Over this past weekend, Robin and I played Into The Fray (43), which would be Robin’s first glance at Cavalry (A13), and would be a bit ‘meatier’ in terms of squad numbers to what we had previously played. Robin played the attacking Germans, whilst I had the defending Poles (Allied Minors). German balance (turn 2 AFV arrival) would be in effect.

To win, the Germans must either exit 30 VPs off the south edge, or amass at least 20 more CVPs than the Poles. Exiting 30 points looks to be quite a tough ask, given the disparity in squads (16 German to 27 Polish !!), but amassing 20 more CVPs looks well within reach (especially given that there are 14 green squads with an ELR 2, which threaten to Disrupt (A19.12) and surrender (see 4th sentence of A19.12) the moment enemy Infantry are adjacent at the start of the RtPh. 5 AFVs are going to make routing even more difficult, but they are thinly armed – the occasional elimination of any such AFV (5 CVPs, unless the crew survives) will help pad the Polish lead.

The Poles have to set up on rows R and S, so I spread them out in cover as best I can. You really don’t enjoy a lot of options with your setup. The mission for now is ‘damage control’, at least until the reinforcements arrive. The other important thing is to keep the ATRs safe, so they are kept towards the back, or in strong TEM. 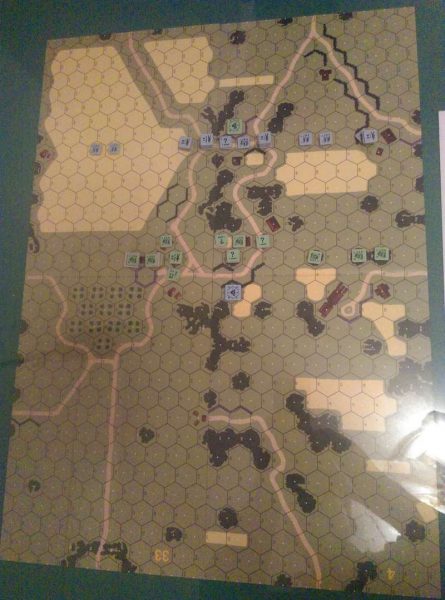 In the first turn, the Germans break the MMG squad in R8, and creep closer to the Polish lines. A few German MMCs break, but they continue forward. In Polish turn 1 the cavalry show up, but do no fighting from horseback. Instead, they function as mounted infantry, and by utilizing Gallop (A13.36) to rapidly reinforce the green squads, keeping out of German LOS and range for the most part. The following German turn 2, the AFVs arrive, and that’s really when the battle starts.

Robin uses the 2 PzIIAs to support the assault on the central board 33 buildings, whilst the 3 PSW 221s support the clearance of board 4. The PzIIA use their 15MP to get behind the green squads, paying the 2 ATRs less mind than I thought Robin might. I am able to knock out 1 PzIIA, but the other survives, and traps my squads when they fail morale, forcing them to surrender to following-up German half squad teams.

Meanwhile, on board 4, the PSW221s play ‘cat and mouse’ with the Polish, which is rather bravado, given their 1MT (stun = recall) status. I fire at the crews many times, but Robin survives for the time being. However, most of the German MG firepower is subduing the board 33 central buildings, and later the wooded area in the center of the map, and the infantry on board 4 lack the ‘punch’ to break Polish squads regularly, and German progress is largely negligible, my Poles occasionally double-breaking half-squads to help pad the Polish CVP total.

On turn 5, Robin notices a clear LOS to 33N10, which contains my 9-2, 2 458 squads (one with the MMG, the other with an ATR). Robin rolls a 1KIA, which eliminates the ATR squad (as well as it’s ATR) and auto-breaks the rest. In the RtPh, my 9-2 surrenders, and (including prisoners) Robin is 7 points ahead of his goal (29 to 12). However, I have (finally!!) stunned a PSW221 in 4I2, and one of my 458 squads kills it in the CCPh of my turn 5, closing the gap to goal+2. If I can knock out another AFV, and largely preserve my infantry, I can turn this very close game around. We play the first 5 turns on Saturday, and this is how the map looks at the end of those 5 turns: 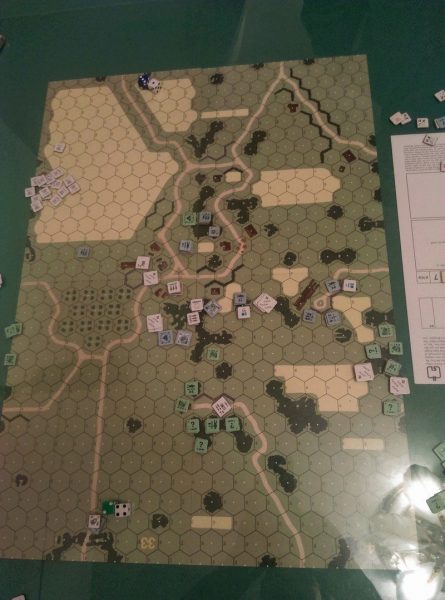 We resume the game on Sunday, with Robin being a bit more circumspect with his vehicles. Nonetheless, I wreck another PSW221 in 33C6, which puts Robin behind his goal, and on board 4, I am even able to capture a German squad, putting Robin further behind. Meanwhile, my green infantry slip away, whilst my stronger 458 squads try to buy time.

In his last turn, Robin reverts back to his devil-may-care attitude, and tries to capture enough prisoners to put him ahead. It starts badly when a squad gets KIA-ed, but by the end of it, he just manages to capture a squad and 8-1 leader, which will put him exactly 20 points ahead (49 – 29), so long as he can survive my final turn. In my final turn, my only salvation is to eliminate an AFV, and I am able to assemble 3 437 squads and a heroic 8-1 to do the job. However (in spite of friendly leader assistance), all 3 squads fail their PAATCs (1PAATCs for these guys, A25.91), and the leader has to go it alone (CCV2 @-1). The leader rolls 3,3 (which coupled with a squad, would have been a game winning 5 CVP kill, had 1 of my squads made their PAATC), and then the tank (gets 4:1) eliminates my leader for a final tally of 51 – 29 in an epic game that went right to the last CCPh !!!! 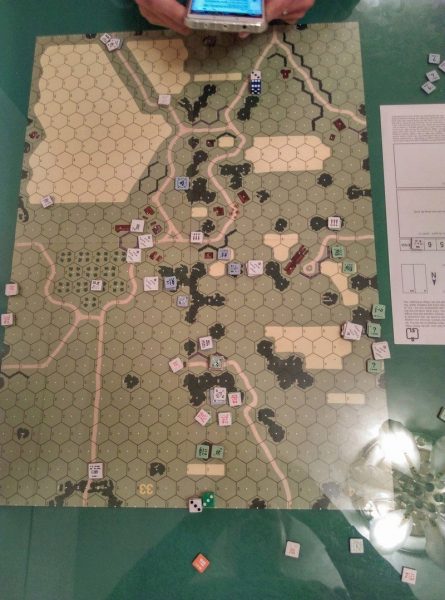 A really awesome ASL scenario. One of our best to date. Thanks to Robin for an awesome game, and congrats on the win !!!!