Hitler had declared Warsaw-Praga a fortress, keystone to the Vistula line. The city was to be held at all costs, but this was neither likely nor realistic. The Waffen SS veterans assigned the task of holding the city held no illusions as to what such a defeat would mean. The recon troop of the 2nd Polish Tank Regiment was not looking for a fight as it searched out a route to the Most Slaski Bridge but it found one …

Last Sunday, Robin and I played Dash For The Bridge (7). I played the defending Germans, whilst Robin played the attacking (although ‘infiltrating’ would be a more accurate description) Russians. Russian balance (offboard German leaders must be the best available) would be in effect.

To win this scenario, the Russian must exit 3 AFVs off the west edge, or amass 10+ CVPs whilst losing less than twice as many as they amass. Considering that SS don’t surrender to Russians via the RtPh (A25.11), it’ll be difficult to take prisoners. Perhaps if both guns were found and captured, getting 10+ CVPs could be attainable, otherwise, it strikes me as being quite a bit to do.

The Germans defend with 8 658 squads, 4 leaders, and 2 37L AT guns and crews, whilst the Russians attack with 6 T-70 AFVs, 6 447 squads and 2 leaders. SSR4 allows the Russians to exit off a north or south edge road hex, and secretly re-enter (on the same edge) later. Rule C13.311 is in play, which means that Panzerfausts must be individually assigned to units via a secret side note.

With all German units setting up HIP, the Russians have to cautiously advance through 2 end-on-end city boards (20,21), or somehow attain 10+ CVPs. The fate of the Russian infantry is a lot less significant than that of the T-70s. I recommended that Robin keep the tanks close to their infantry escort. The SS can be deadly, with their Panzerfausts (C13.3) and Anti-Tank Magnetic Mines (ATMM) (C13.7). I set up 2 squads offboard (and therefore 2 PFs and 1 leader) to mitigate SSR4, and the rest set up deep on board 21. 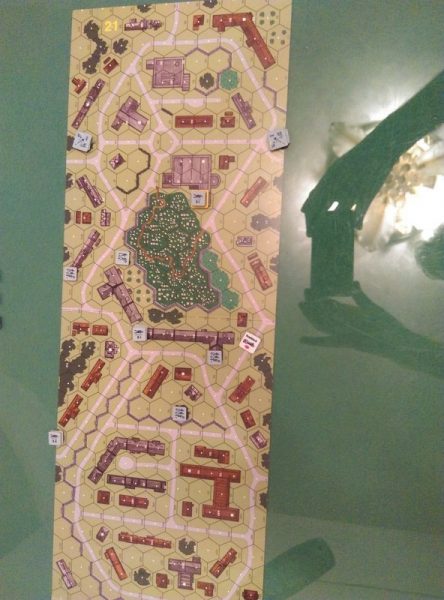 During the first four turns, there was no contact at all, and in their turn 2 MPh, Robin exited 3 tanks off 20Y1. By turn 5, Russian tanks were entering board 21, and a bit too far ahead for their infantry to protect. 2 Panzerfaust shots needing 5 miss, but by the end of German turn 6, one T-70 is immobilized, and 2 more are wrecked, all victim to Reaction Fire Street Fighting (D7.211) and Close Combat. The German HMG in the 2nd level of 21H4 makes keeping up and supporting the AFVs very hazardous for the Russian infantry. Still no sign of the T-70 platoon that exited 20Y1 during turn 2… 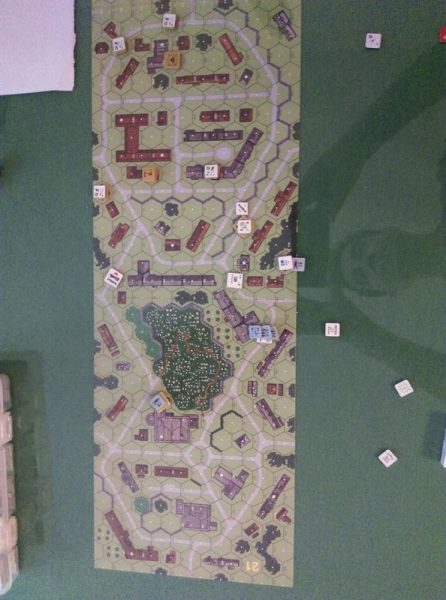 In turn 8, the exited platoon re-enters. Robin rolled ‘6’, and had I not left 2 squads offboard, the Russians would have won immediately on turn 8. But the 2 squads mean that the Russians have to re-enter on hex 21Q1, from where they try to find safe firing positions to put some pressure on the HMG. The German squads creep closer and eventually, the Russians are forced to flee, having failed to dislodge the HMG. When the T-70 in N3 starts, the 348 in N4 fires (its only) PF, TH8+1 (size) and Hulldown (D4.2). My DR is [2,5] turret hit (FTK 27), and the T-70 is roasted, which ends the game as a contest. 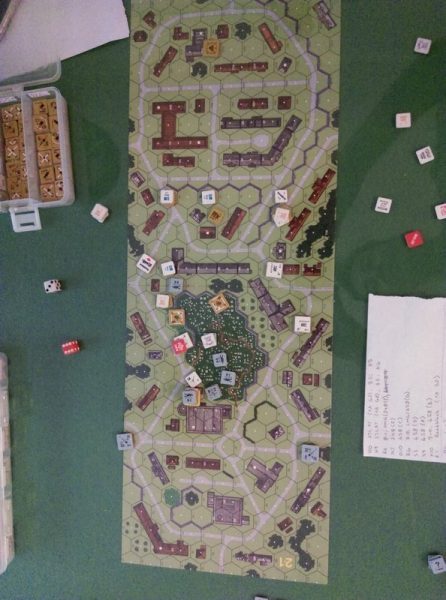 This scenario was played in about 3 hours, and Robin got to learn of the effcitiveness of infantry vs AFVs in an urban environment. I thought Robin did let his AFVs get a bit far ahead of their protective infantry, although when they needed them most, the HMG position in level 2 of 21H4 made moving forward very difficult for the Russian infantry.

It was fun to play this scenario again, especially the C13.311 optional PF usage rules.

ASL AAR: Counterattack On The Vistula (134)