Before the 8th Army could launch its assault on the Mareth Line, it had to clear the Axis outposts between the Wadi Zeuss and the Wadi Zigzaou. One of these, held by veterans of the 90th Light Division, encompassed a group of small hills appropriately named the “Horseshoe” by the British. Pilots reported that the Horseshoe was not heavily fortified, with few mines evident. Montgomery felt it a fine opportunity to safely blood the untested 201st Guards Motor Brigade before the heavy fight to break the Mareth Line. At a meeting of the brigade’s officers, he quipped, “When I give a party it is a good party, and this is going to be a good party.” The plan was to launch a two-battalion night attack behind a creeping barrage. After the Horseshoe was seized, MGs and AT guns would be brought forward to bolster the Guards against the inevitable counterattack.

This is a night scenario that takes place in the desert for a change of pace. The Chapter F terrain rules involved are deirs, hillocks, sangars, scrub and wadis, although there is actually only hillock, one deir and one wadi on the map of a single board. For a little more fun, there are mines, known mines, dummy mines and a creeping barrage. It is not an exciting scenario, but it is an interesting scenario. It evokes a type of battle of which I have read occurred a number of times during WW2. One side has an objective that requires its soldiers to march straight into the teeth of the other side’s defense with nothing but their shirts for protection.

The scenario takes place near Mareth, Tunisia in March of 1943. I found it odd that the scenario introduction described the British battalion as “untested”, but all the MMC are elite. The British are working against a CVP cap of 25. The Germans are also working against a CVP cap because the British win immediately when they have caused 16 CVP. The British can also win at game end by having more VP than the Germans. VP for both sides includes the CVP; as well, the British can obtain extra VP by clearing the Germans from the hillock (no good order German MMC). The Germans can gain VP by having units on/east of hexrow Q at game end. The scenario has a length of 9.5 turns.

I should have given the German CVP cap more weight in my planning, especially considering the limited ability to rout at night (only Low Crawl is possible). It was enjoyable to have 60 hidden mine factors to cover 10 hexes. For a change, I was guaranteed that the British would be tripping some mines. The SSR have some influence on where the Germans can place their mines, both the hidden and the known.

The German OB has 6 elite squads, 1.5 elite HS and 3 first line squads, supported by fortifications, 80mm OBA, 2 MMG, 3 LMG, a light mortar and a 75mm INF gun. They have three leaders; only one leader has a negative modifier. This being a night scenario also gives them HIP and dummies. I used the dummies mostly to hide where the hidden mines were, and to give the impression of a well-defended deir, since that was the only defensive terrain the British would encounter (and might try to use) on their way to their objective. I placed two squad-equivalents on the wrong side of the known mines, although in hindsight I believe it was a mistake to have one MMG there. I also should have considered that those units could be captured instead of eliminated. I felt it necessary to have a HIP OBA observer, so I stacked him with a HS to be able to do that. I placed fortifications, three squads and a leader (planning on some deployment) on the hillock to make it harder for there to be no Good Order German MMC on the hillock. I set up the two MMG to have intersecting fire lanes. Most of my units are covered by fire of at least one other unit within NVR. The OBA will hit the British in the minefield and after.

The British have 18.5 squad equivalents, which includes 5 HS, 4 648 and 12 458 units. Four squads can be sappers. There are five leaders; two have a -1 modifier and one has a -2 modifier. There are 8 LMG and 5 light mortars. The British are also carrying a radio; it is for their OBA module of 120mm that starts as a creeping barrage, but is convertible. Normally, a creeping barrage has the possibility of starting early (i.e., pre-game), but this scenario gives an automatic black chit to have the creeping barrage start on time. Working against the British is that they are Lax for the purpose of straying.

Had I been playing the British, I would have made two or three small stacks of a sapper squad, a negative leader and another squad to clear mines reasonably fast. Together they have a -5 or -6 DRM, depending on the leader. The British start east of the wadi.

The log tells me that I decided to forgo starshells on the first turn, even though the enemy FFE gave me the opportunity, in the hope of more British units straying. The British had 4 cloaking counters stray. One unit reached the hidden minefield in the K row on the first British turn.

My first attempt at OBA in German turn one drew a red card. I found out that the creeping barrage was advancing every player turn. The rest of the Germans chose to keep concealed.

During British two, the two German bore-sighted MMG used the night rule that allows them to put down a fire lane before any British unit moves. One British sapper squad worked on clearing mines. A couple of British units broke in the minefield. German turn two saw the 80mm OBA land as harassing fire on the British in and around the center of the minefield to break several units. It also took out some German dummy stacks. The British creeping barrage took out more dummy stacks and revealed the HIP HS in the deir.

Disappointingly for the Germans, during British three, 4.5 squads waltzed through the minefields undamaged; three of them were the 648 variety. The sniper broke the light mortar HS before it ever fired. The British had lost 4 CVP at this point.

The creeping barrage finished off the HS that was broken by the sniper. It also broke the gun crew before they took their first shot. The British spent some time moving around outside of the illuminated areas, but still moving forward. The British cleared a path through one minefield hex at the south edge during their fourth turn. Things looked a little bleak for the British. They had a lot of broken units near the mines and a number of units still waiting for mine clearance.

Happily for the Germans, the gun crew rallied on its first try. Misfortune hit the MMG team closer to the British; they cowered while attempting to place a firelane to protect themselves from charging British units. The other Germans were illuminated, so could not help to protect the MMG team. They died in CC. The sapper squad at the north end cleared a minefield hex with some help.

The German OBA had some trouble being effective because of poor starshell placement and a lack of known enemy targets. The creeping barrage found the German observer, but luckily did not break him. The creeping barrage ended on British turn six, but was converted to normal OBA of 120mm. A lot of British progressed through the dark areas of the map. The southern flank of the German defence was comprised when the squad in that area CR’d to enemy fire, followed by British finding a dummy mine hex in the Known minefield string. In German six, the sniper eliminated the German leader in the hillock defence. The observer lost access permanently. The Germans had inflicted 11 CVP, while the British had inflicted 7 CVP.

The British started using smoke to hinder the German defense. Several units walked through decent fire attacks unscathed in the German south flank. During German seven, a light mortar CH broke the north MMG team with leader. They chose to stay in their foxhole rather than rout one hex. In British eight, a broken HS deep in the German area self rallied and created a leader. The OBA broke the gun crew. On British eight, they found a second dummy minefield in the north. With very few good order Germans available, the British troops poured through the northern flank. We made a mistake in the rout phase when broken Germans surrendered to adjacent British. At night, this does not happen. The surrender raised the British CVP total to 16, so we stopped at that point. The British actually needed to capture or eliminate the broken units in CC. It is more than likely that this would have happened before the Germans could push the British over their CVP cap. 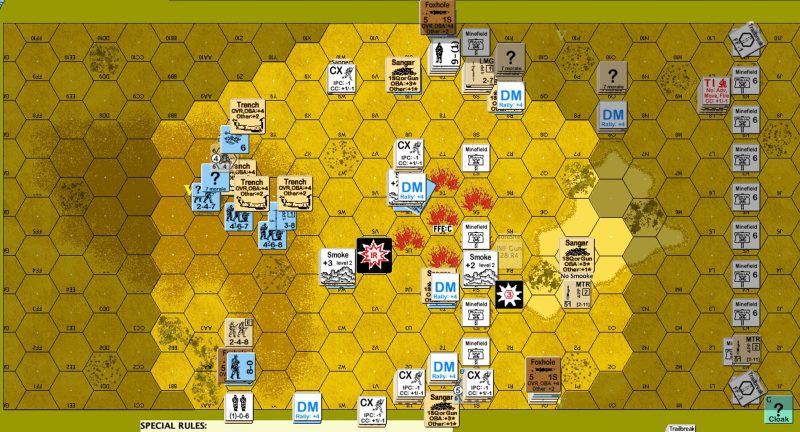 Things that I wished I done different: put the observer as the only leader on the hillock so the other MMG would have a leader to avoid cowering. Second, I would move the squad and LMG from the hillock to the ground level for another firelane possibility. Third, I might pull back the forward MMG some hexes.