The mission of the 101st Airborne Division in Operation Market-Garden was to secure the 15 miles of highway stretching from Eindhoven north to Veghel. The Screaming Eagles faced almost no opposition until the paratroopers reached the northern outskirts of the village of Zon. As the 1st Battalion entered the village with A Company in the vanguard, they were fired upon by a concealed heavy AA piece – the fabled German 88, one of several in place to protect the bridge from Allied bombers.

The previous week, Tou Mu and I completed S-014 “88s At Zon”. I played the defending Germans, whilst Tou Mu played the attacking Americans. American balance (and a 7-0 leader to the Americans entering on turn 1) was in effect. To win, the Americans needed to exit 7 VPs off the south edge on/between F0 – L0. They have a total of 11 squads, 3 leaders (increased to 4 due to balance), that enter in two groups during turns 1 and 2, and they have 5.5 turns to complete their VCs. Opposing them are 6.5 German squads, 3 leaders, and 2 crewed 88L AA guns.

The defense is quite simple, a point defense around the exit area, with the AA guns as the linchpin of the defense. Meanwhile, the squads try and buy as much time as possible (the terrain of board W is a lvl 0/lvl 1 town, which greatly lends itself to skulking and reverse slope defending). 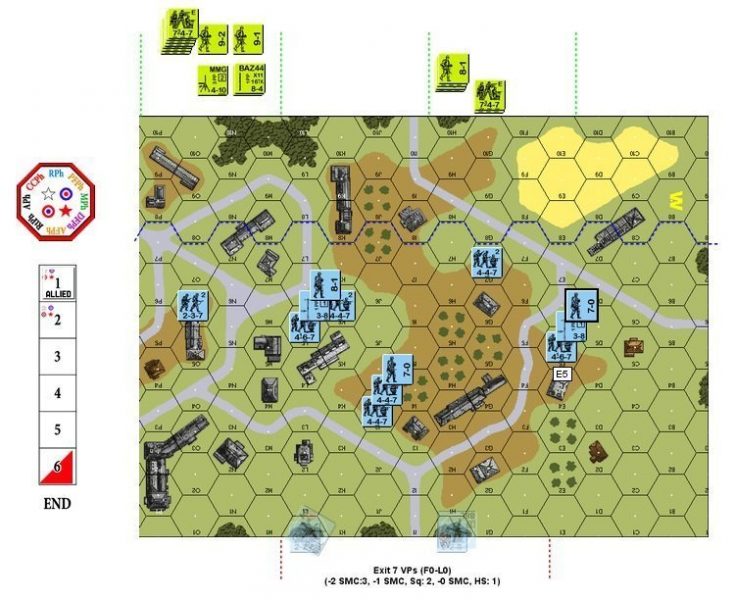 Tou Mu was bold with his turn 1, and this cost him a squad for modest gains.

Fom turn 2, he showed more patience, and it was good to see him using a lot of smoke. The game of cat and mouse had begun!!! Tou Mu forced me south with a slow and steady pace, preparing for a final turn exit. For the most part, I kept nearly all of my German forces intact, except for turn 5, when a number were overwhelmed in CC. In the final turn, he made his dash, but residual FP in F0 and G1 pinned or broke most of his squads.

Oddly, he forgot to use his infantry smoke, which I think would have made a big difference. Nonetheless, the 9-2 leader, plus an 8-0 leader (that was created in CC), and a 7-4-7 managed to exit, leaving Tou Mu 1 point short of the VCs. It came down to final fire versus hex G1, which in the end saw the 8-1 leader pin, and the squad break, accounting for Tou Mu being 1 point short.

A very close game in the end! 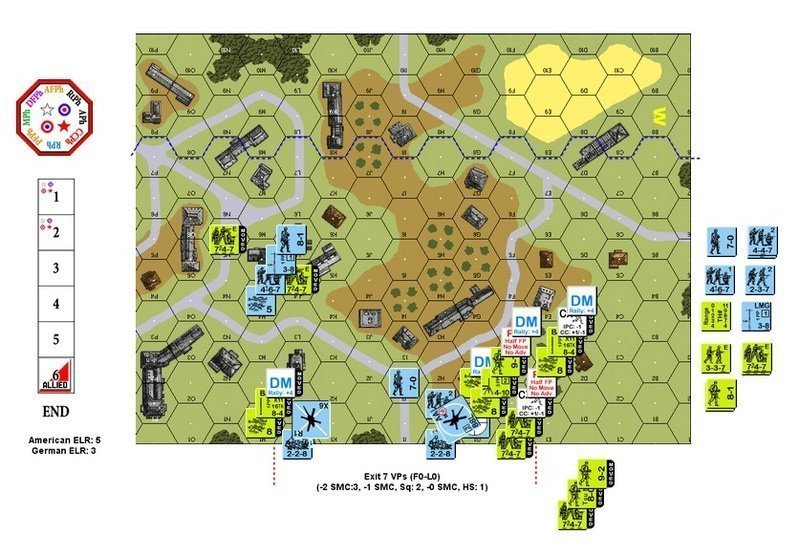