On June 12th, to expand the Omaha Beach foothold, the 18th and 26th Infantry Regiments of the “Big Red One” launched a morning attack in the direction of Caumont. Initial progress was swift and the village of Sallen, 3km north of the objective, fell easily. But as dusk approached and the Americans tried to enter Caumont itself, they were hit by a counterattack comprised of infantry and assault guns from Panzerdivision 2. The battle raged in the fading light as the Germans pushed the Americans out of all but one small corner of the town. Early the next morning, having been reinforced with Shermans from the 743rd Tank Battalion, the 26th Infantry tried again.

This past weekend, Neal Ulen and I played Second Crack at Caumont (AP32). The Western Front American vs German scenario takes place on 13th of June, 1944 near the small French village of Caumont L ‘Evente. It depicts elements of the U.S. 1st Infantry Division (the “Big Red One”) trying to expand the Normandy beach head by taking on elements of the German 2nd Panzer Division. 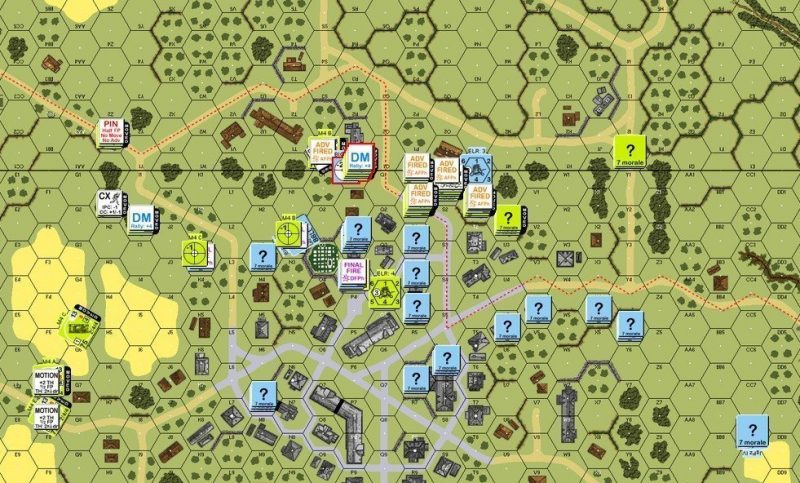 To win, the Americans must Control 12 or more multi-level stone buildings, providing the Germans have amassed less than or equal to 29 CVP’s and have six turns to accomplish their goal. I had choice of sides in this one. Since Neal seldom gets to play the Americans (yes I hog the Americans the record is undisputable on that point) I decided to be the nice guy and let him take them for a change. 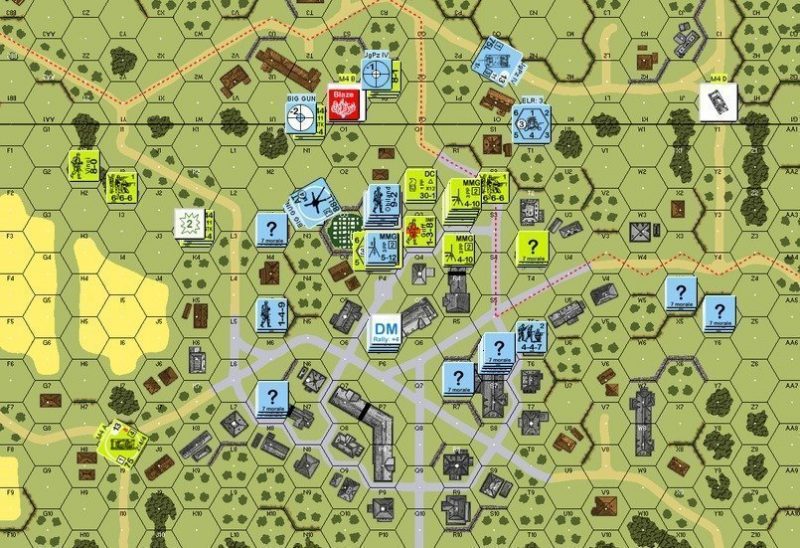 For my defense, I would setup my units entirely concealed, including twelve concealment counters. I would center my defense around the village church, placing a half squad (stacking limits) and MMG in the steeple. Adjacent to the steeple I would place my kill stack, two squads, two LMG’s and 9-2 leader. I would string out a sizable portion of my force along the south side of the road leading east from the village, at the end of this line would be a squad with a Panzerschreck to guard the road junction there. This line was intended to prevent any far ranging flanking attempt down the right side of the playing area, as well as compose a possible mid-game counterattack/flanking maneuver of my own. I would set up lightly on the west side of the village, only one squad and several stacks of dummy counters, but used a hidden 88LL AT gun to help bolster the northwest corner of the village. I also figured my turn 3 reinforcements could be rushed up to strengthen my left flank if need be. I would position my only starting tank to cover my right flank against the American Shermans. 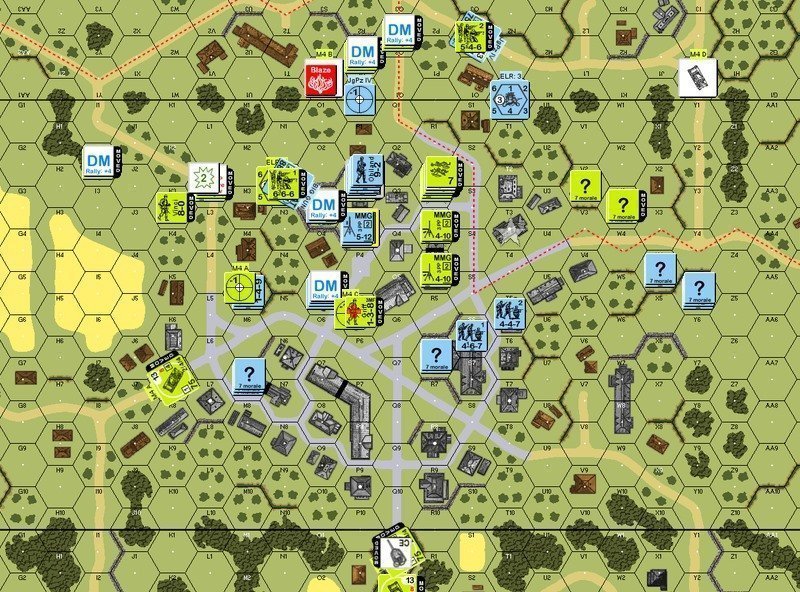 Neal would setup and initiate a three prong attack, sending the majority of his armor down the left hand side (which I had no answer for), a platoon of infantry came at the northwest corner of the village, a platoon straight down the middle and the rest of is infantry force came at the northeast corner. He would attempt to bring one tank down the middle and leave one tank to stand over watch over my JgPz. 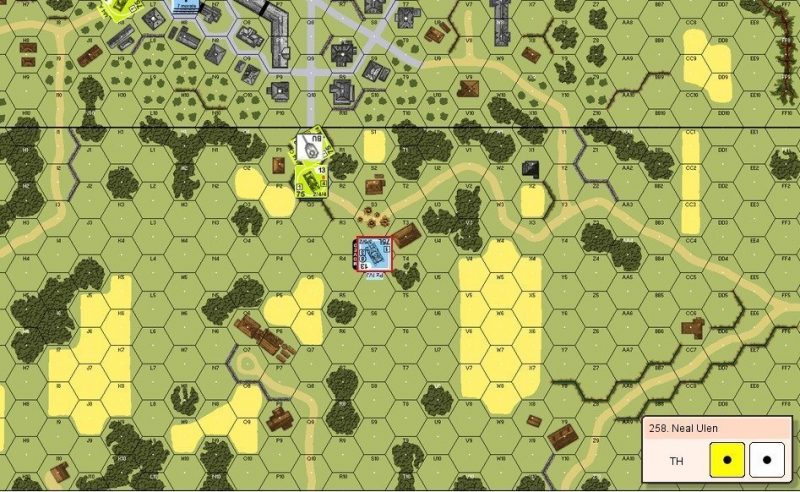 Second Crack at Caumont (AP32) is reputed to be very balanced and it definitely played out that way. The game would quickly devolve controlled chaos, with momentum swinging back and forth several times. My hidden 88 would wreck a platoon of his infantry and take out one of his Shermans early. Neal’s infantry would take out my JgPz in close combat (I never learn, but would gladly repay the favor later!).

After several turns, I was starting to have doubts about how long my infantry could hold the village. My thoughts were turning to taking out as many of his Shermans as possible, hoping to get the needed 29 CVP to prevent an American victory. But when Neal took out my reinforcing Panzer IV with a critical hit before it could even discharge its weapon. I thought the game was lost and was very close to throwing in the towel, but after several deep breaths, decided to reluctantly soldier on. It would prove to be fortuitous, as in the end it would be Neal who would throw in the towel, he simply didn’t have the time left in the game to grab enough victory buildings after spending too much time trying to push me out of the church complex. 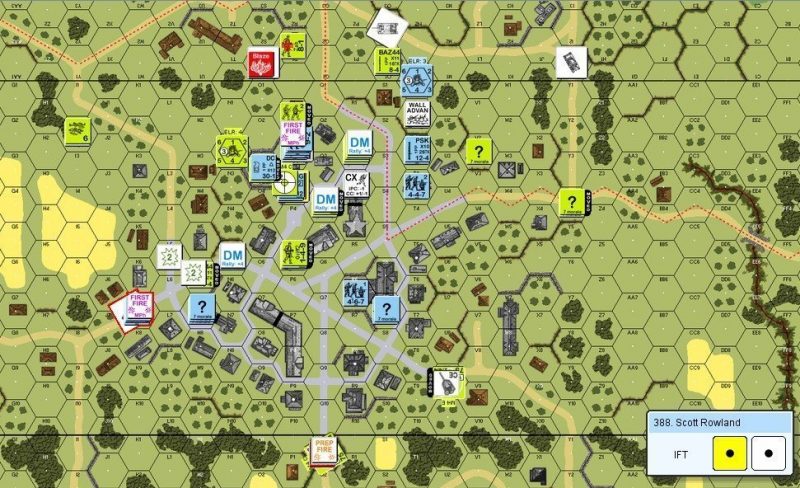 Although this was a win for me, it didn’t really feel like a win. Both sides were pretty well beaten to a pulp, we were both down to just a few good order squads each. A very well balanced, fun and exciting scenario, highly recommended.

As always, my thanks to Neal Ulen for the game. I couldn’t ask for a better opponent.