Colonel Merritt Edson’s command, a composite battalion made up of U.S.M.C. Raiders and Para-marines, had just been ordered to occupy a “quiet area”, an unnamed ridge overlooking the all-important Henderson Airfield. Much depleted from past operations, they were moved to give them a rest. The Japanese, however, had organized a series of complicated maneuvers designed to surprise the American defenders and to reach a point adjacent to the ridge through which they planned to assault the American lines and break through to Henderson Field — the key to maintaining control of Guadalcanal. General Kawaguchi’s gamble gained him an element of surprise, allowing him to bring 3,000 soldiers against the 800 Marines occupying the ridge. But these Marines were some of the best and toughest on the island and were determined not to retreat.

Last week, Neal Ulen and I took our first plunge into SK4. Advanced Squad Leader Starter Kit 4 introduces the Pacific Theater of Operations to the Starter Kit series. Besides Pacific Theater Terrain (Jungle, Bamboo, Palm Trees, Kunai and Huts) and the Japanese (Banzai Charges), SK4 also introduces “Concealment”, one of my favorite aspects of full ASL. I have always had a thing for WWII’s PTO, so was genuinely excited about getting to SK4, and must say it did not disappoint. 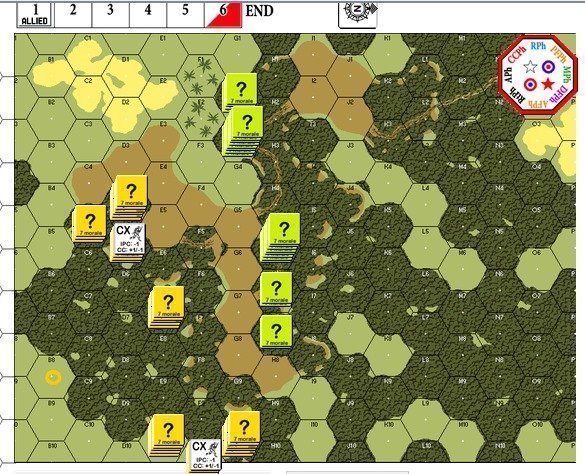 We chose S64 “KAWAGUCHI’S GAMBLE” for our first scenario, which takes place near Henderson Field, Guadalcanal, 13 Sept. ’42. It basically depicts what would become known as “The Battle For Edson’s Ridge”, or “Bloody Ridge”, control of Henderson Field and Guadalcanal in general.

My flanking attempt would generate our first “Banzai Charge”, which would end in the loss of Neal’s 9-2 leader and three squads, not good. The next several turns involved me chasing Neal across the board where he would make a final stand on the Northwest corner of the hill.

I chose to play the Japanese, leaving Neal to defend with the Americans, a mixed force of Marine Raiders and Paramarines. The Japanese would win at game end if there were no Good Order American MMC in any Level 1 hill hex. The Japanese have five and a half turns to get the job done. 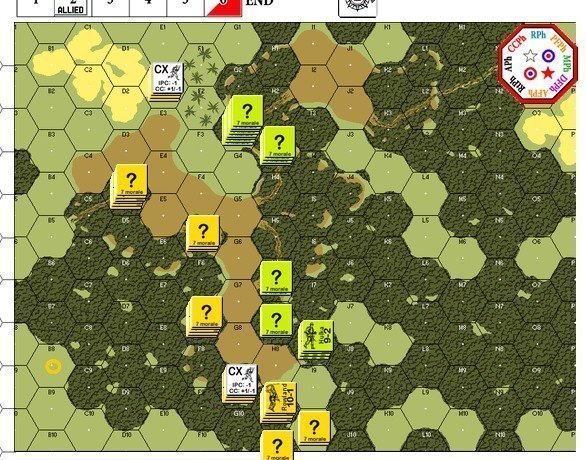 The Americans setup first and the Japanese enter along the South board edge (Left). The first two turns consisted of movement, mostly by me, getting into position for a frontal assault with a little lower board edge flanking maneuver. Neither side wanting to do any unnecessary shooting that would cause Concealment Loss. My flanking attempt would generate our first “Banzai Charge”, which would end in the loss of Neal’s 9-2 leader and three squads, not good. The next several turns involved me chasing Neal across the board where he would make a final stand on the Northwest corner of the hill. I made one serious mistake on my turn five, I more or less took my foot off the gas to better position my forces for a final push, mistakenly thinking I had Neal right where I wanted him, it would prove a costly error, Neal would do some last turn maneuvering to put his guys almost out of my reach. My final Banzai Charge would be ineffectual in removing all of Neal’s forces from the hill, still I would win two out of three Close Combats and the fate of the game would come down to the final dice roll. 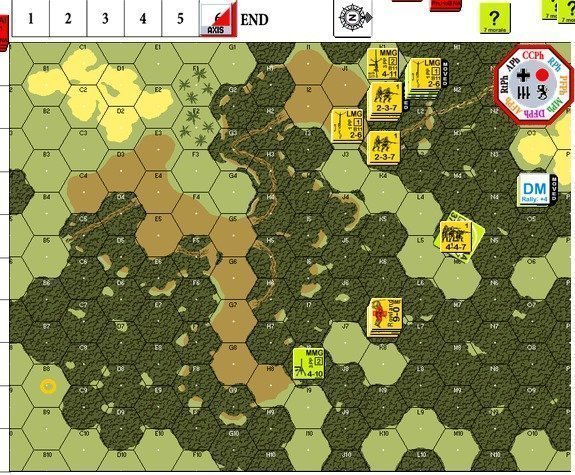 Another close, disappointing loss for me, but as always, can’t complain too much, as it was great fun.